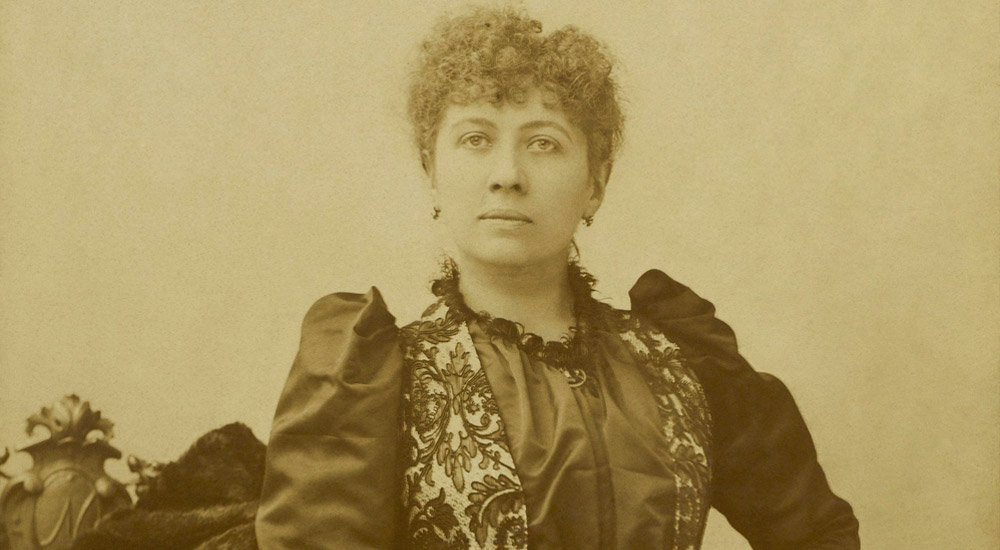 Franca Giansoldati, journalist of Il Messaggero, became in 2014 the second woman in history to interview a Pope. Since Pope Francis has already granted various interviews to various media and also Benedict XVI (with Peter Seewald) and John Paul II (just remember Vittorio Messori), the importance of the fact that a woman interviewed a Pontiff was less.

However, this is a rather unusual fact, and even more extraordinary if you think about who was the first to do it, because to find a similar case you have to go back to 1892.

Who was the first journalist to interview a Pope? The newspaper libraries bring to light a surprising fact: the honor went to the French journalist, socialist and agnostic Caroline Rémy, better known by the literary pseudonym of Séverine, who on July 31, 1892 managed to interview Pope Leo XIII in the Vatican palaces in an interview lasted almost an hour and a half.

The article was published on August 4 in the newspaper Le Figaro on the front page, and aroused great reactions at a political and diplomatic level, because at that moment France was burning with the controversial Dreyfus case.

For those who do not remember, it is the scandal for the trial of the French Army captain Alfred Dreyfus, accused of high treason and deported with false evidence orchestrated to condemn him.

However, the controversy was rekindled by the fact that one of the accusations against him concerned his Jewish origin, which triggered a strong wave of anti-Semitism in French public opinion, especially among right-wing groups, including the Action Française of Charles Maurras, supported by many Catholics.

Séverine, together with Émile Zola and other leading intellectuals, defended Dreyfus, and did even more: since many justified the anti-Semitism of their attitude by appealing to the Catholic faith, he had the courage to go to the head of the Church to ask him what thought of anti-Semitism itself.

The interview, according to reports from L’Osservatore Romano, was managed by the then Cardinal Secretary of State, Mariano Rampolla del Tindaro. Rémy wrote to him on the previous July 9, presenting herself as “a woman who was a Christian and remembers it, to love the little ones and defend and weak”, and “a socialist who, despite not being in a state of grace, kept intact in her heart The profound respect for the faith, the veneration of the august elders and the captive sovereigns are wounded ”.

The Pontiff answered Rémy’s questions without wavering, recalling that Christ is no exception to people, and that the Pope of Rome had historically protected the Jews of the ghetto. Leo XIII was 82 years old at the time. It should be remembered that after the unification of Italy and the invasion of the Papal State, the Pope considered himself a prisoner in the Vatican, a situation resolved by the Lateran Pacts of 1929 with Pius XI.

“I would consider it unworthy and unfair to attribute a single word to the Holy Father that was not rigorously exact, and even exaggerate what he wanted to answer me”, wrote the journalist in Le Figaro. “Even though he never once said ‘I condemn’, he said ten times in an hour ‘I don’t approve’. I leave it to Catholics to draw the conclusion they prefer from this attitude ”, he added.

Throughout the interview, Séverine showed special affection for that “very moving and august old man”, who “raises his hand only to bless”. At one point he asked him about the relationship between the Church and the Jewish people. “Christ shed his blood for all men without exception, even for those who, not believing in him, insist on not recognizing him”, replied the Pontiff.

“The Church must remind them of the truth”, declared Leo XIII. “By persuasion or persecution, Holy Father?” The journalist asked him. “‘With persuasion!’, The Pope replies briskly”.

“The Church”, the Pontiff added, “is an indulgent mother with her arms always open both for those who leave and for those who return. And it has a mission to defend the weak. The wicked who reject it must be his favorites ”.

Le Figaro’s interview can be consulted at the French National Library.

Caroline Rémy has become one of the most admired journalists in France. She has collaborated with almost all the newspapers in the country, and has always been remembered for her generous and combative character, which has earned her the appreciation of even her opponents. She died on April 22, 1929, murmuring that she still had to finish writing various articles.

It should be remembered that the Holy See placed Maurras’s works among the forbidden books in 1926, which represented a serious blow to his sympathizers among French Catholics.

Share
Facebook
Twitter
WhatsApp
Linkedin
Email
Print
Telegram
Previous articleHow do you become a journalist?
Next articleAdvertising, Agcom: “In 2019 for the first time online collection exceeds that of TV”
- Advertisement -